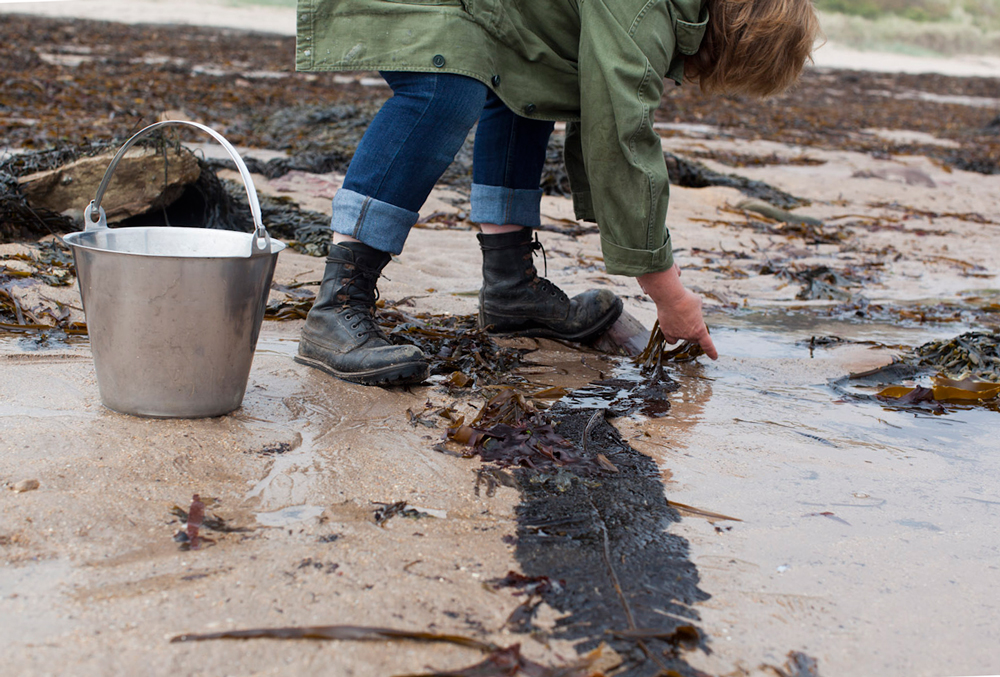 I’m often asked when the best time to harvest seaweed is. It certainly isn’t in the summer. Sadly many people’s view of seaweed has been coloured by their childhood trips to the seaside at the end of July or in August when temperatures are high, and the beach strewn with washed up, smelly, slowly-rotting seaweed.

Higher water temperatures tend to slow down the growth of seaweeds. By high summer they’ve released their eggs and antherozoids and are settling into old age.  Most seaweed species grow fastest from January to May and are at their tastiest and most productive during the Spring – from February, through March, April, May and early June. Their growth rate slows down as the water temperatures rise from June to September, the slowest growth rate being in August. Once the sea temperature start to cool in the autumn, the growth rate starts to pick up again, particularly after November. I personally start picking in February and they taste amazing.

There are three colours that divide the seaweed families.
Brown Phaeophyta x 1800 species
Red Rhodophyta x 6500 species
Green Cholorophyta x 1500 species
The red seaweeds are the tricky ones as they can look brown, red, pink or green!

Edibility
Luckily for us here in the British Isles there aren’t any poisonous species… well… the only one to watch out for is featherweed – 4 species of Desmarestia that grow mainly in deep water. They have mastered the knack of producing a little sulphuric acid to put off predators. So its far less complicated than trying to identify edible fungi! Learn what a featherweed looks like, and then you can gaily wander the shore nibbling and tasting.

A couple of caveats. Do make sure that you’re collecting from an unpolluted source. Avoid beaches near towns, sewage pipes, run-off and industry. Check with the Clean Beach websites as bathing water quality is monitored and the results published every year.

Just because it isn’t poisonous doesn’t make it a choice edible. Some taste like fish food or have the texture of hair. But there are many that have exquisite tastes and you’ll be surprised at the variety of flavours.

Also, don’t pick dead seaweed from the splash zone. It’s like picking your salad off the floor of a supermarket when everyone else has driven their trolley over it. Check the tides and go out when the tide is out so you can harvest from the living plants.

How to harvest
Take a pair of scissors. Don’t yank the stipe off the rocks. You’ll not only kill the seaweed and prevent it from growing again next year, but you’re also going to end up with sand and flakes of rock in your harvesting basket. Cut the blades off above the stipe, leaving a little of the blade so that it can grow again. Picking clean is good for you and good for the seaweed.

Always spread your harvesting around, taking a little here and a little there. One of the most basic rules of foraging is “don’t be selfish”.

Safety first
Don’t be blasé about the tide and the tidal zone. Always look up the tide either online or buy some tide tables. Set an alarm on your phone for when the tide turns so you allow enough time to get back.

Always go out with a friend. If you slip on a wet, seaweed covered rock, you could bang your head and knock yourself out. Tell people where you are going and when you will call them to let them know you’re back. A simple precaution could be the difference between life and death. Make sure your phone is fully charged and that you have a signal.

Some people like to wear lifejackets and carry flares. Personally I find a lifejacket gets in the way too much when I’m harvesting so I don’t. I also don’t carry flares but I do always have a first aid kit in my car and some basics in my pocket, and some first aid training! I also recommend a loud whistle. My harvesting knife has a whistle in the handle as I can’t whistle for toffee anyway!

Equipment
You’ll need a pair of scissors or a knife. Personally I find the spring-loaded shears used in dressmaking – that look like a small version of sheep shears – to be the quickest to use, especially when my hands get cold.

For collecting the seaweed you’ll need buckets or bags. My favourite is an old wire shopping basket as it drains, so I don’t have to carry lots of water around as well. I usually take a few small plastic boxes with lids for the more delicate finds to stop me losing them when everything gets mixed up together.

Washing
There’s a lot to be said for rinsing the seaweed in the sea, as you go along, if you can find a deep rock pool that’s free of sand. However the seaweed will be saltier than if you dry it in fresh water.  If you take seaweed home, whatever you do, don’t put it into a bucket of fresh water and leave it overnight. By the morning you will have a slimy mess and, if you’ve had dulse in there, a slimy, purple mess. This is caused by the alginates in the seaweed. They’re extracted for commercial use in anything from toothpaste to puddings. The best thing to do is to rinse the seaweed in a big tub of water and hang it straight up to dry, even if it is just on a clothes rack over the bath.

Drying
There are no rules. Small species like pepper dulse can go into a dehydrator or a low oven. Larger ones on clothes racks, pegged out on the washing line or even hanging from the stairwell. I’ve seen it all! When I’m camping at the coast I string a line between two trees. When I’m at home I tend to use the folding wire clothes airer. Make sure seaweed is properly dry before you store it away. With some seaweeds, like laver and dulse, I will often lightly toast them in a hot, dry frying pan for a few minutes to take any last moisture out. This also changes the flavour but be careful not to burn it as it can happen very quickly!

With oarweed I roll it up and store it in glass jars. Over time they become covered in white powder. This isn’t mould, it is all the salts and sugars, like mannitol, coming to the surface and all part of the taste. Some of the oarweed I cut into lengths about 12 cm long and let them dry like that. I tend to use these in the same way that other people use bay leaves. Just one or two added to a dish. They keep for several years as long as they’re kept in a dry place.

Sea lettuce and laver (that isn’t turned into laverbread paste) gets lightly toasted and crumbled. Then also stored in jars. This gets sprinkled into lots of dishes.

Dulse I dry whole – for reconstituting into quiches, tarts and ‘fish’cakes – and I also powder a lot of it and make microflakes. It is often best after about a year or two as the flavour of aged dulse just keeps on improving!