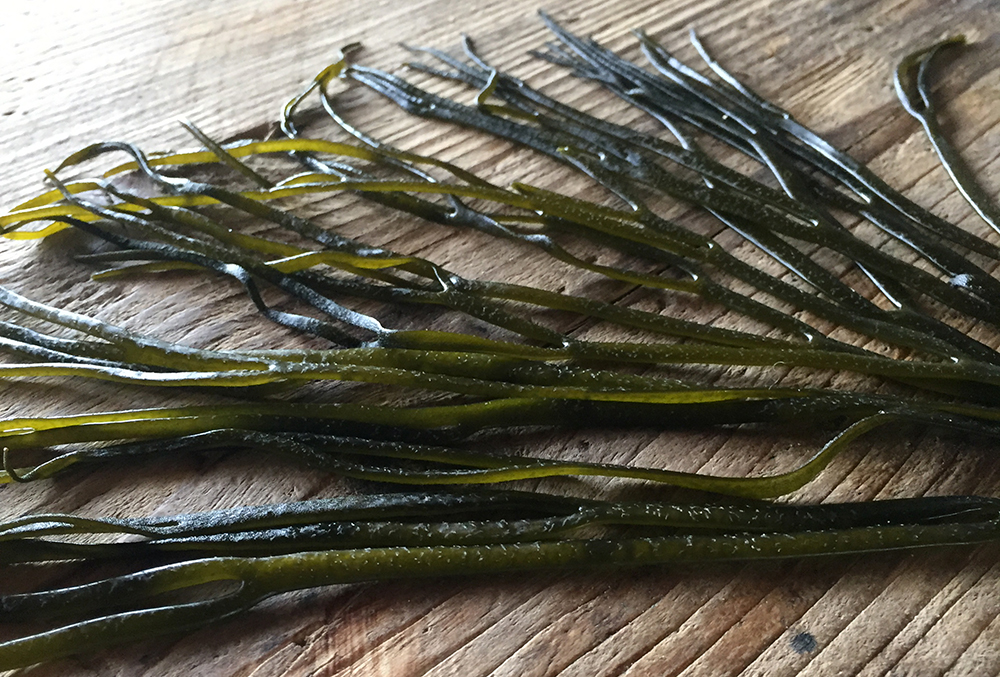 Thongweed (Himanthalia elongata) is called sea spaghetti because it really does turn out like pasta! It can be eaten on its own or mixed with spaghetti, cooked and added to a soup or even eaten cold. Before cooking it as spaghetti, I like to marinate it for 10 to 20 minutes in some lemon juice or sea buckthorn juice. This is optional but I find that the acidity helps to speed up the cooking time and also adds flavour.

Then simmer it for 10 minutes or until al dente. Serve with a little olive oil or melted butter, salt and freshly ground black pepper. It’s delicious. It has a mild taste – not at all seaweedy and also the texture of spaghetti.

Thongweed is a brown seaweed (Fucales) and grows from a button-shaped disc that puts out two main frond ‘branches’. It starts growing in the autumn and winter and can reach up to two metres long by the summer, dying back after it has reproduced. When harvesting only take one main branch. Leaving one frond and the button behind allows the seaweed to keep on growing and reproducing for around 3 years. Each frond grows thick and divides into thongs. Why ‘thong’? Well think of the Australian word for rubber flip flops and not lingerie.

It grows on rocks on the lower shore right next to the sub tidal zone, exposed at low tides. It particularly likes gently sloping rock shelves.

The name sea spaghetti is somewhat misleading as mermaid’s tresses/bootlace weed Chorda filum actually looks more like brown spaghetti than the thicker thongweed. However, while Chorda also grows from a tiny button, it is unbranched and grows in a few metres of water. I typically find Chorda on the leeward side of the Hebridean islands trying to wrap itself round the outboard motor propellor!

After a quick rinse on the day of harvest, thongweed keeps relatively well in the fridge for a couple of days. It also pickles well and can be dried and rehydrated. Here it is rehydrated and added to a quiche with haddock.