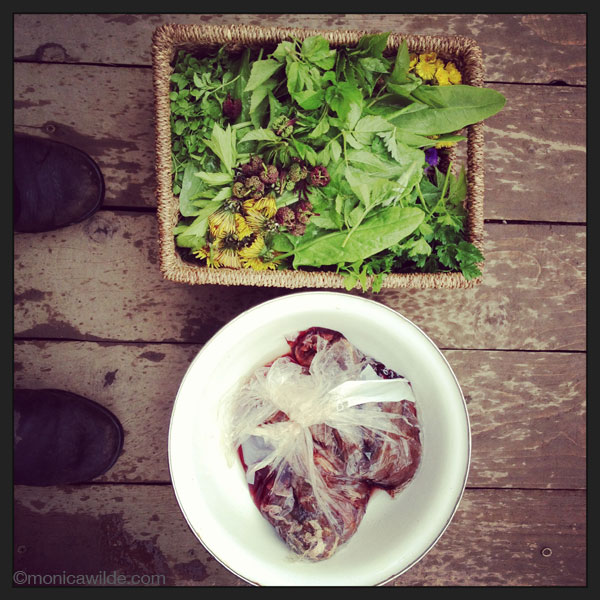 Foraging reconnects people with nature in a really positive way. Once you can identify plants, appreciate their culinary and medicinal values, recognise them as old friends and discover the wondrous ways in which nature works its sentient biochemical magic, you are left with a deep awe and respect for nature, the plants, the fungi, the algae and all living things.

Yes, you can also learn an appreciation from bird watching or nature surveys but, for so many of us, tapping into that most ancient instinct to forage, is a direct route to a life-long passion for the outdoors.

From an evolutionary perspective, we’ve been foragers for even longer than we’ve been Homo sapiens (c.90,000 BT). Our Homo species ancestors were cooking outdoors some 200,000 years ago. It’s hard wired into us. Over the many years that I’ve been teaching I’ve seen people transformed and transfixed. I’ve seen troubled urban youngsters, with hardly any experience of being outdoors at all, become fierce champions of their environment. Children as young as two cataloguing a lawn into daisies you can eat and buttercups you can’t. People on the autism spectrum who’ve relaxed and opened out over a fascination of fungi. I’ve seen grown men at the top of their careers, with tears in their eyes, become so absorbed in scrutinising the ground beneath their feet that they’ve forgotten to look at their phones and check their email – for hours! They feel liberated once more from ‘time’. Foraging does that do you. It takes you back to a world where we belonged for thousands of years, where we feel at home – connected to nature, connected to the planet.

So it’s more than just a trend, fuelled by celebrity chefs and the annual “aliens ate my fungi” tabloid headlines. It’s more than the eating. Although finding your food and eating it is, like breathing and sex, one of the most basic of instincts, most silver-haired foragers that I know would still go foraging even if they could never taste the fruits of their labours again.

There are countless studies that show (I’m happy to send you a list of references) that when children and adults reconnect with nature that they are happier, healthier and better citizens for it. Even the most predominant bacteria found in the soil, boosts serotonin levels in our bodies and makes us feel happier.  Gardening makes us feel calmer. Walking in the woods lifts our mood, our spirits and frees us from the stress of the city, the constant pressure of noise, pollution and too many people. Loving nature makes you care for it.

When we teach foraging this is what we aim to inspire. Not a greed, nor a middle-class foodie trend, but an all consuming passion for plants and the places that they inhabit. Knowledge brings awareness. No self-respecting forager would trash the place that the wild garlic grows, nor trample mycelium under the moss that, just after the warm autumn rain, will bless them with chanterelles for breakfast.

This is why it’s such a tragedy to see foraging bans imposed. By all means pursue those who exploit the resource, but to impose a blanket ban on foraging for all – the sledgehammer to crack a nut approach – is yet another of our most ancient liberties removed. And one that the planet really needs, because those who forage for themselves and their families are those who truly care for Gaia the most!